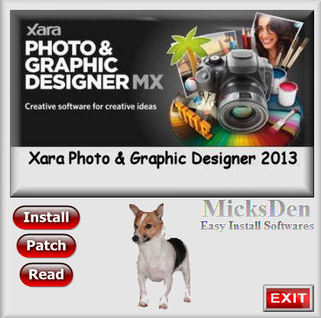 Quite simply the world's fastest graphics software, with truly flexible illustration tools and revolutionary photo handling. A single application for all types of creative work, whether it's vector drawings, DTP, photo composition, web graphics or Flash animation. Comes in 2 versions, Photo & Graphic Designer and Designer Pro, Pro offers advanced print and web design features.
Productivity & Interface
Xara Designer is famous for its speed and unrivalled ease of use, making it not just a highly productive tool, but a pleasure to be creative.
Speed
Xara Designer has the world's most sophisticated, highest performance vector rendering engine. Quite simply this makes it the fastest graphics software to be found.
Direct Action Tools
Xara Designer's Direct Action Tools allow you to create effects such as transparency, shadows, bevels or gradient fills in an interactive, fast and intuitive way. No distracting dialogs - simply drag on the object!
Drag and Drop
Many tasks in Xara Designer benefit from being able to use the drag and drop principle, which is the most intuitive way of working and a great time saver. It also supports drag and drop import of files, such as photos.
Solid Object Editing
Instead of dragging outlines when you draw, move, rotate or resize objects, Designer offers solid live object manipulation. Only Designer is fast enough to do this on complex vector graphics.
Undo / Redo
Being able to change what you have done is vital in a graphics package. Xara Designer allows unlimited undo, making experimentation easy.
Zoom
- The Zoom tool allows magnification up to 25,000%, perfect for detailed work. And it's super-fast and resolution independent too.
- If this image was created in Photoshop with the same detail, the file would be 2000 x 3000 inches, take hundreds of megabytes of memory and file space. As a vector design it takes just 180Kbytes!
Anti-Aliasing
Xara introduced the world's first vector anti-aliasing to bring maximum screen quality and is still a pioneer with the fastest, highest quality anti-aliasing available in any drawing program. 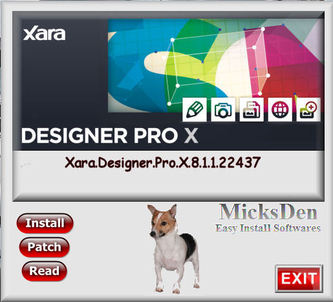 Producing vector illustrations is quick and easy using the comprehensive drawing tools, but many of the advanced features which Xara pioneered - such as transparency and real-time anti-aliasing - can be applied to both vector and bitmap images. Rather than falling into the bloatware trap that is common with graphics products, Xara has concentrated on creating the world's best implementation of the essential toolset that designers really need, in order to ensure that working with Xara X can be both highly creative and very productive. As well as all the drawing tools you would expect, Xara X offers options such as automated shadows, bevels and contours, pressure sensitive brush stroking, multi-stage graduated fills and feathering.
Xara Designer Pro (formerly Xtreme Pro) is our top of the range product and includes all the features and templates of Web Designer and Photo & Graphic Designer. Plus it adds extra features that Pro designers need including support for PDF/X, PANTONE® and color separations, multi-core processor support for extra speed, enhanced import/export filters, a pro version of the photo panorama tool and more.

Xara Designer Pro includes a complete 'website creation' feature that enables you to design multi-page websites with ease, including mouseover and pop-up effects, navbars and menus, animations and widgets. One click preview and ftp upload included. It's the world's most advanced WYSIWYG web page layout - and with no HTML skills required! Xara Photo and Graphic Designer and Designer Pro offer a genuinely easy way to create really efficient Flash animations.
Xara Designer Pro gives you total design freedom - using drag and drop you can literally place anything, anywhere on the page. And things which are normally difficult to achieve in HTML are a snap in Xara Designer Pro - for example text with curved edges, text or graphics at an angle, text flowing around objects - no problem! But Designer Pro has some clever tricks too, to make things easier for you - here's just a few of the things that will save you time and trouble: Liquid text flow around objects; easy mouseover, thumbnail and pop-up creation; automatic adjustment of photos to the correct web resolution; one-click change of site wide theme colors and shades; automatic color matching of imported objects such as buttons; and buttons and text panels that automatically stretch as you change the text.
Working with industry standards is vital, so Xara Designer Pro sites are W3C compliant, cross browser compatible (IE 5.5, Firefox, Safari, Chrome) and XHTML, CSS standards based.
Designer offers support for a huge range of file formats, making it easy to exchange your work with other users and programs. This includes common bitmap types (eg GIF, JPEG, BMP, PNG, TIFF, PSD, and RAW photos) and key vector types (eg PDF and AI/EPS, and EMF/WMF). For text Xara Designer supports RTF (Rich Text Format) and for websites HTML and Flash.
Xara Designer has full support for importing and exporting Adobe Photoshop® PSD files including layer support. Xara Designer offers industry leading export of super-clean, very compact PDF files (including support for graduated color fills and flat / graduated transparency). Combined with the PDF import feature, this provides another way to interchange files.
Xara Designer Pro offers the ability to produce CMYK color separations. This includes on-screen preview of CMYK and spot color plates, PANTONE® color support, spot colors, on-screen printer gamut preview and a lot more.
Xara Designer Pro supports XPS export (and has a beta XPS import filter). This is an entirely new ‘page description’ file format invented by Microsoft that's vector based, and so is ideal as a resolution-independent portable document format. 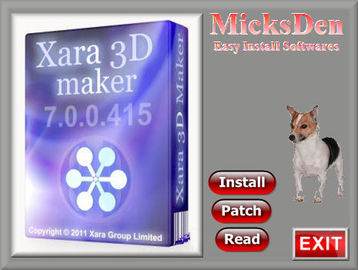 Xara 3D Maker 7 is an exceptionally easy-to-use 3D graphics program that specializes in animated fonts and texts. It's most useful when creating credits sequences or intros to YouTube videos or things like that. The nice thing is, it can take any font on your system and make it 3D, and animating it frame by frame is a snap.